The Animal School – A Parable 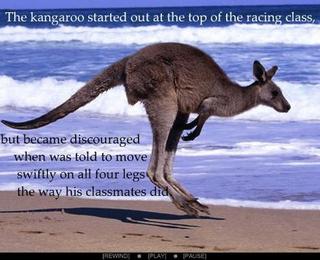 An old story tells of the creation of a school for the animals. In this school, everybody took the same four courses: flying, swimming, climbing, and running. Among the students were a duck, a flying squirrel, a fox, and an elephant. These four were highly motivated, and wanted to get good grades, so they all tried very hard.

The duck did fantastically well in swimming and flying, but he lagged behind his classmates in climbing and running, so focused special attention on those two subjects. However, his feet became so sore from trying to run and his wings were so bedraggled from trying to climb that by the end of the year he not only failed both those subjects, but made C’s in swimming and flying, which had once been his two best subjects.

At the beginning of the school year, the squirrel was first in his class in climbing and running and was second only to the duck at flying. But as the months wore on, he missed so much school from catching pneumonia in his swimming class that he failed everything.

To make matters even worse, because the squirrel constantly squirmed and chattered in class, and had difficulty paying attention, he was diagnosed with a learning disorder. The squirrel eventually was placed in remedial classes and had to be medicated in order to continue with his school work.

The fox was a natural in his running class and scored well in climbing and swimming, but became so frustrated at his inability to get good Grades in flying that he began assaulting his classmates. He even tried to eat the duck. His behavior was so disruptive he was expelled from school. He fell in with a rough crowd and eventually wound up in a center for animal delinquents.

The elephant, meanwhile, developed low self-esteem because he couldn’t do well in any of the subjects. When he sank into clinical depression, his therapist persuaded him to try a different school that focused on subjects such as lifting and carrying. The elephant was disappointed, because careers in lifting and carrying were not as prestigious as careers in flying, swimming, climbing, or running. Even though he always felt inferior, he managed to make a decent living and support his family.

Our Children are Individuals

The point of this silly story about a school for the animals is that modern education sends every child through a program of study that is targeted toward a “generic” child. It expects every student to be able to follow the same course of study in the same sequence, without considering innate aptitudes or individual differences that are crucial to children’s abilities to learn. Schooling does not take into account differing personality types or temperaments.

Article used with permission from Homeschool MarketPlace
Any article appearing on this website may be copied or forwarded electronically provided that proper credit is given and that the article is not substantively modified. No article may appear in whole or in part in a publication sold for profit or as part of any commercial endeavor without the written consent of Home School Marketplace.
© Copyright 2006. Home School Marketplace, 1053 Eldridge Loop, Crossville, TN 38571.

Not excited About a New Year – Lacking Motivation

Process of learning via the Internet

Day 5 – Praying for our children