Which Bible do we use?

Quite a few! Some are better than others for reading or studying. What am I able to read and understand? What will I actually read, as opposed to leave sitting on the bedside table?  The Bible has been translated into over 75 different translations! Many countries don’t have a Bible in their own language. But before we go there, let’s take a quick look at the different types of translations.

Some people are confused by the various translations on offer. In summary, there are two types:

Actual Translations.
These are translated from the Hebrew test of the Old Testament and the Greek text of the New Testament. These are Bible such as, King James Bible, Revised Version, and the Revised Standard Version. Then, there are other translations which were very carefully translated such as, The New English Bible, The Good News Bible, and The New International Version.

Types of Bibles:
Each translation comes in different formats. There are Study Bibles, Devotional Bibles, and more. A Study Bible has notes and explanations which can be very helpful. Some Bibles have a concordance built in with it. Many Bibles contain historical and geographical maps but these individual reference books can also be purchased separately. 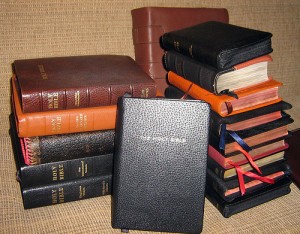 When translating from the original language (Hebrew/Aramaic/Greek) to the Receptor language (in our case, English) there are three ways in which translators go about it.Translators, theologians, clergy and laymen have been debating for centuries over which approach is most accurate in communicating the message of the gospel. I find it helpful in using more than one translation and in our studies we will often three translations – one from each translation theory group.

Combination of Word-for-Word and Thought-for-Thought

:star: The important thing to remember is that the central theme of the Bible is the coming of Jesus Christ, his ministry, death and resurrection. This page is not designed to be authoritative or exhaustive on the subject (far from it) but to give a general idea of the different types of versions/translations available today.

:star: The key is: JUST DO IT! The gospel [the good news of Christ and His work on the cross] is the power of God for salvation. You won’t be saved by which translation you read, so go on…grab a translation or two and read it…today!

Download the ebook, How to Study the Bible, by Rev. Geoffrey Bingham

How the Bible Came to Us by Meryl Doney

The following is a chart comparing the different English translations of the Bible. I hope this helps you in selecting a translation.

HOW Bible Lessons with Little Ones