The Wedding ~ part one

Trying to organise a wedding in only ten weeks is achievable. Just ask us.

If you have wondered why my blog posting has been slow or sporadic, read on and learn why. I have been totally preoccupied with: 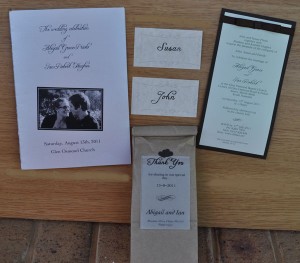 Wedding stationery and bomboniere. Who can guess what the bomboniere was?

After the initial excitement of Mr. H’s proposal it was time to get down to details. After all there wasn’t much time to plan things. One might consider that we should have been prepared for such an event with a 19-20year old daughter but… Suffice it to say that we were not.

We decided to make the invitations ourselves.I worked myself into a dither by trying to consistently tie 70 little brown bows that all looked uniform. I was not having a great deal of success until John put his fitter/turner skills to good use and devised some templates and together we made the invitations, based primarily around Abi’s chosen colour scheme.  Oh man, I love that guy and his skills!

The wedding date was set. Church was booked. Ceremony time and ministers booked.  Aside from dresses, what could be left to organise?

I can’t believe how much of it all that Abigail organised. She arranged most of it all by herself, yet still managed to include me. I love that will aways be appreciative.  Amazingly, she achieved a wondrous balance between organising, delegating, scheduling and still letting other people contribute with their gifts and talents!

The men folk needed some suitable attire. We don’t usually have need for suits in our family. John has a suit in the cupboard. It is about 20 years old and he’s worn it once. So we didn’t want to spend ridiculous amounts on suits to feed the cupboard moths. We looked into hiring suits but providentially stopped into Myer before we committed to hiring. Wow, so glad we did. John, the two boys and my dad were suitably attired at an unbelievable price. Worked out to be cheaper than hiring and we got to keep the suits! (Start the car… start the car! is exactly how we felt — those familiar with IKEA ads will know what I meant)

Invitations were sent out, RSVP’s started to arrive, catering was being organised and the cake was being made by a friend. Abigail found her bridal dress, which is no easy feat when one is only 160cm tall. She even found her shoes to match! Some young women take weeks or months to find the right dress and accessories but not Abi. She knew what she did and didn’t want and wouldn’t be talked into anything else.  Hair and nail  appointments, fittings, etc were all made and being tended to. What else needed to be done?

The Mother of the Bride (MoB) needed a dress! My favourite non colour has and will always be  black. It’s elegant yet smart, timeless and proper, not to mention slimming. But I didn’t want to wear black. I know that it is not considered bad etiquette to wear black to a wedding. I just didn’t want to. I wore callouses into my feet searching for the right dress. It was starting to worry me and I didn’t want ‘me‘ to become an issue in the wedding. I found a gorgeous black dress that not only fitted me perfectly (no easy feat) and was comfortable but it even looked nice too! Oi voi! Does it get any better? Yes it does. It was a price that I liked! [ Start the car! Start the car! ] But it was black. Ding dong. I had stayed away from black and tried to avoid with every fibre of my being… but the wedding day was getting closer and I was tired of worrying about myself when it was my daughter’s big day. So after consulting Abi and being reassured that not only did it look nice and that she really wasn’t fussed about the colour unless it clashed horribly with the colour scheme (which it didn’t) I then sought my husband’s approval. He loved it. MoB dress –  check!

Oh, did I mention that my dear Dad came to stay with us a few weeks before the wedding. I love seeing him and having him visit but it still did throw things around a little. Bedroom and wardrobe arrangements were in dissaray, schedules need to be re-tweaked. Yet this just added to the overall excitement level. Oh, did I also mention that Dad is diabetic and thus needs to eat several small meals a day? My kitchen looked like that of a truckie roadhouse for the weeks leading up to the wedding. I tried to breathe deeply and not fuss over it until 3 or 4 days before the wedding whereby I buckled down and deep cleaned it from the tippy top to bottom. I vowed and declared to skin anyone who dared mess it up.

One week to go

I worked like a mad woman for the whole week before the wedding. I wanted the house to be spotless and immaculate (which would be a rarity in itself), I wanted the whole family to dressed beautifully in clothes that would not leave us penniless for the next ten years. I wanted the day to run perfectly smooth, with all of us having adequate rest and food. Well, it doesn’t take a genius to see that I was just a tad over ambitious.

With only a few days to go, it was time to make the bomboniere (wedding favours). Due to the nature of the bomboniere we couldn’t make them too far in advance. They had to be fresh!

We had a typical bridesmaid dress debacle and an incident involving a rather unaccomodating, rude bridal saleswoman. This in turn, forced Abigail to change the colour scheme of the flowers with only 2 days to go. Thankfully Flower Folly were more than happy to go with it and meet her needs. Many young brides may have had a hysterical fit at all this but not Abi… in fact, she was calmer than the rest of us. However throughout the previous few weeks poor Abigail was sick. She had been to the doctor’s and was on her second course of antibiotics for a possible lung infection. She wasn’t getting any better but I kept her on telling her that it was stress and that she would be fine on The Day.  [More on that story later…]

John (the FoB) managed to whisk Abi away for breakfast and have a Dad~Daughter date before officially giving his blessing on their marriage. I’m so glad that they had a couple of hours together. I’m sure it is a time they will both treasure.

I felt like I was caught in a whirlwind yet was thriving on the adrenalin; here I was running back and forth to various appointments, confirming reception numbers and allocating seating arrangments, ushers, catering, coffee machines, rehearsals, flower petals, accessories, my dad, my husband, my sons, my younger daughter (also a bridesmaid), bathing the cat and organising bite sized food snacks for the morning and organising the clothes and emergency girly bag. (safety pins, hollywood tape, spare buttons, needle & thread, spare toothbrushes, perfurme, makeup, etc.) I had spent quite some time with Abi in the preceding week but it was always doing something, going somewhere, being busy with the wedding. I just wanted to stop. And have coffee with her. But we were both too excited and preoccupied to sit still for long.

Mr. H is a youth pastor so the youth group gathered together as usual on the Friday night and helped us to set up the church and hall. Chair covers, satin sashes, carpet runners, tables, decorations and such were arranged as much as possible. It was time to head home and catch an early night. Aha, wrong again! I had Order of Services to finish compiling and printing.

And so it was…

I dragged my weary, aching legs into bed at 2.15am on Friday night (actually 2.15am is Saturday morning but at that point I was trying to remain positive and so preferred to think of it as Friday night), after working on the Order of Services (ceremony programs) and deciding that getting a few hours sleep had to be more worthwhile than ‘the perfect program’. I felt like I didn’t sleep at all, although I must have. I tossed. John turned. I flopped. John rolled.

The Morning of the Big Day

6am – Tinkle, tinkle, tinkly bells…  My alarm clock gently awakened me so I swiped it to snooze for another 10 minutes.

6.05am – BEEP!  BEEP!  BEEP! John’s alarm clock bellowed loud enough to wake the dead, or so I thought. Obviously not loud enough to wake him though. My alarm clock is sweet, gently rousing me from my slumber to remind me that the day is beginning. John’s alarm screeches and roars then plays a horrid squawking song. Nothing, and I mean NOTHING makes me feel more agitated than being woken by that horrid, ungodly noise. On and on he slept, seemingly oblivious to its demands and my sounds of anger and frustration as I lurched over him to turn the monster off. I only managed to stun it into silence for another ten minutes though.

6.10am – Tinkle, tinkle, tinkly bells… my clock sweetly and patiently reminded me it was time to get up. No, I didn’t spring out of bed, on that day – the day of my daughter’s wedding. I was too weary. But I dragged myself up and into the shower so that we would be at the hairdressers on time. “At least I might be able to catch a quick nap whilst getting my hair done.” I thought silently. The words gullible and naïve now spring to mind.

Out of the shower. No time for a morning cup of tea. No facebook/email check. Maybe at the hairdressers?

Stay tuned for part two, coming up next week.

[edited to add: No one was harmed in the leading up to this wedding. ]

The Promised One: Week 2: Creation

Lessons in trust (and family update)

How to write a best seller