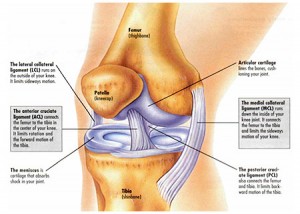 Well hasn’t it been a busy week? With taxi-ing children to their activities, upgrading websites, building new ones, housekeeping, softball, phone calls and forums there’s little time left over for blogging!

Who remembers that I injured my knee late last year? Actually it’s the second knee injury I’ve sustained. I tore the meniscus cartilage 6 years ago and had to have surgery to have the right side of the cartilage cut back and shaved.  I knew how I did that injury though- I did a softball movement and felt and heard a distinctive “pop”.

Not so this time! I thought at first, that I had injured it again at softball but the more I’ve thought about it I believe it happened at the gym. I tried to go too hard at an exercise which strained the muscles and ligaments around the knee and then without giving it sufficient rest I used a machine which should never be used with those who have knee problems. I felt a little ‘pop’ but nothing major. However continuing to exercise hard and play softball aggravated it and made it worse until I tore the cartilage severely.

It took me awhile to go to the doctors to get a referral to the specialist because I knew it would mean surgery and I was too busy! C’mon surely other homeschool mum can relate to that?

Eventually I went. My surgery was scheduled for the 26th March. Eek! This would be cutting it fine as exactly 7 days later I was due in Melbourne to coach an U/19 Women team. Thankfully the assistant had put me on the cancellation list. Last week I received a call from the surgeon’s office asking if I wanted to come in early. Oh yeah! so, tomorrow is the day!

Miss A and I will leave home at 6.30am and John will pick me up after work later on in the evening. Miss A will then head back home and oversee the boys doing their household chores and lessons. Then they’ll head out and do the grocery shopping. She even hopes to have a meal cooked but i think she may be guilty of over scheduling. 😉

I don’t know how long recovery will be as it depends upon what the surgeon has to do. From the x-ray it looks like he will have to cut back the left side of the meniscus which will leave me with no meniscus cartilage but the worst part of that is a dull arthritic pain which I get now anyway. So I’m not fussed, there’s people all over the world a lot worse off than me. It will be lovely to not be in constant pain though – I am looking forward to that.

I’m also looking forward to getting back into exercise! Wow I have missed it. I’ve also felt it in my body too. At first I thought that I could keep exercising my upper body but the reality is that constant pain just wore me down and I have barely been making it through each day. The thought of trying to exercise is just way too much at this stage. But soon… soon I will be back on the bike and treadmill and lifting the weights!

Anyway, that’s my bit of news for the week… how’s life at your place?

My Flesh Is Weak But…

How Much Time Do You Spend In Bible or Devotional Reading?

Delighting in our children