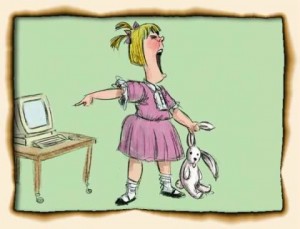 Facebook recently changed their whole layout. As is typical on Facebook, a large number of groups and pages were created by users to express their anger and frustration. Groups such as “I hate the new FB. Give us back the old layout!” and other such titles. The number of comments from people who logged on to the FB account, saw the changes and whined annoyed me. People asked (well, they posed it as a question but I doubt they really want to know the answer) “Why does FB have to change all the time?“.

Now I don’t know much about FB or why they do what they do. But I do know a little about website development, albeit on a much smaller scale than FB. Security, cutting down on bandwidth, advertisers, cosmetic appearance and usability are all some of the reasons that I know of for changing a site’s layout and setup. They may have other reasons yet again but these are the ones that I can think of…probably because they’re the reasons that I have when changing AussieHomeschool’s site layout and functions.

Surely no one would disagree with this. Well, just as hard as site owners work there are sick hackers who work harder, seeming to get pleasure from defacing (at the least) and hacking into sites. Website security and patches moves at such a ridiculous rate… it’s hard to keep up, but we must. And sometimes, not every time, but some times a complete layout is needed to fit in with the security updates.

Bandwidth: an issue for everyone.

Just because I might be have a great broadband connection doesn’t mean that I should strive to make my website and bandwidth friendly as possible. Did you realise that your Facebook is free? Yup, you didn’t pay for it. In fact, any surfing of FB that you do comes out of your monthly bandwidth limit. But did you realise that FB also has to pay for a bandwidth limit so it costs them bandwidth every time we (users) download or view a page! Same with AussieHomeschool- it doesn’t cost the user to view the site but we pay our monthly bandwidth fee as part of our account. The bigger the page the higher the bandwidth. So the more streamlined and smaller each page can be, the better for all of us! (however I’m sure that FB doesn’t struggle to meet its payments like most smaller websites).

Layout changes occur because of the bandwidth issue and streamlining of pages but also to accommodate the needs of advertisers. Well, someone has to pay, don’t they? FB is a free service but they largely depend upon advertisers. And as with most forms of media, a great deal of weight is given to advertisers. It’s just how the world turns! Same with our non profit sporting club – we give as much credit and weight as we can to our sponsors and donators, for they help keep the club alive. That’s fair, isn’t it?

Sometimes the layout changes occur because of the advancements in website design. New features and functions are constantly being developed and these changes are most often for the user’s benefit. If there were no change, there would be no Web2.0. We’d all still be reading text from static HTML pages! Imagine life with no status updates, no interactivity. Oh my!

Other times changes occur in order to keep up with modern browsers. All web browsers read and render information differently. Most browsers adhere to web standards but not all. AussieHomeschool and this site were built according to web standards. At the time of initial publication of each template used the sites adhere to web standards but Internet Explorer 5,6 and 7 do not read websites the same as other modern, functioning browsers. Therefore, as the IE browser upgrades changes, adaptations are made to sites and components used so that it can attempt to accommodate IE. Not easy.

Some seem to complain for the sake of complaining. Seems to me that some people updated their status indicating their dislike for the new layout before even having a play with it. In fact, the whole layout is easier. It is more compact yet more comprehensive. Previously, every corner of the FB screen contained links: Top left, top right, bottom left and bottom right. Hmmm, quite a scroll to get to the bottom at times. However now all the information is found at the top of every page: top left and top right hand corner. In most cases it may only be one click extra but it’s all in the one place. This is clever site design.

I was bemused to see the amount of younger people griping about the new layout and how much they hated it! Some were swearing in protest and saying they would leave FB.   🙄 Wow, if they can’t handle a little thing like layout changes then how will they handle the lemons that life may throw their way? We do well to model and teach our children to be flexible and adaptable in this modern, technological age. They have a distinct advantage over the previous generation when it comes to technology… let’s hope they make the most of it!

Lastly I had to spare a thought for the older generation. People like my dad! My dad will probably read this post… but he won’t comment. :-*  I hope that one day he will, but for now he is on a huge learning curve, just by owning a computer, learning to turn it on, open a browser and find his way around google and my website.  He is doing such a great job and I am so proud of him! It is no easy feat learning about modern technology when one hasn’t grown up surrounded by it. We can learn a lot from the older generation – namely the flexibility, adaptability, love of learning, zest for life and patience that our younger ones (myself included) need to develop.

Next time a website changes (and most sites change layout and appearance at least annually) spare a thought for the site owner. There’s usually a good reason for it. At the very least, go download yourself a proper browser… you’ll be amazed at the difference!

Parenting – for whose sake?